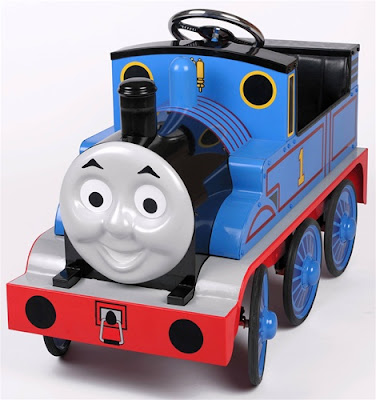 Thomas the Tank Engine and all of his friends have been the favorites of children for years. This classic book and television series takes kids on a magical journey to a more innocent place, promoting wholesome values and stimulating hours of creative play. If you have spent time with young children, you have probably seen their faces light up with joy when they see the familiar little blue engine and all his pals from the Island of Sodor. The following is a brief story of how Thomas and Friends were created, beginning in the 1940s.

How it got started

Thomas the Tank Engine started out as a small toy, made by the Rev. W. Awdry for his young son, Christopher. Awdry would spend evenings with his son, inventing tales about this small, blue engine and all of his friends. Encouraged by his wife, Awdry began to write down these stories, and eventually, they were illustrated and published. The book series about Thomas the Tank Engine became enormously popular, and Thomas went on to have many adventures, all the while teaching children important life lessons.

In the late 1970’s, the British television producer came across the Thomas the Tank Engine and Friends book series and adapted the stories for television, with the tales narrated by a variety of celebrity voices. The program quickly became a hit and lead into a tremendous range of spin-off products.

In 2000, Thomas became the star of his first movie, Thomas and the Magic Railroad; several other movies have followed, with Thomas and his friends experiencing numerous adventures. His movies have been consistently well-received by young audiences.

As with many other popular movies and children’s characters, Thomas and Friends licensed merchandise has become an extremely lucrative commercial venture. You will find Thomas the Tank Engine train sets in various styles, along with all of the accompanying train cars and other vehicles. Books, clothing, and even bedroom décor are all popular with preschool age children. The Thomas pedal train has proven to be one of this season’s biggest sellers.

Where you can find Thomas the Tank Engine pedal trains

A Kid Place is a great source to find a Thomas the Tank Engine pedal train, along with everything else you will need to make this holiday season one to remember. Visit us today for easy ordering, and sit back and enjoy the rest of the season and all the joy it has to offer.