The History of the Coke Machine 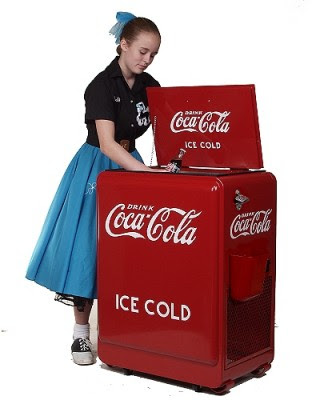 Whether you are old enough to remember the first Coke machines, back when a bottle of icy cold Coca-Cola cost only a nickel, or you are a fan or collector who specializes in vintage Americana, the American Retro coke machine is the perfect addition to your family room or patio area. For the enthusiast, here is a little bit of the history of the ubiquitous Coke machine.

Coca-Cola was already the most popular American soft drink when the Coke machine first appeared on the scene in 1929. The original machine was a basic ice chest with the Coca Cola logo on it, manufactured by an Indiana company known as Glascock Bros. Manufacturing. It could be found in drug stores and malt shops everywhere; the 6-oz. bottles sold for 5₵ apiece.

Throughout the 1930s, Glascock Bros. continued to manufacture their signature Coke machines; the smaller models were designed to fit on store counters, or they could be wall-mounted to economize on limited space. A larger, “standard” model was available on casters so that it could be moved easily; the cooler held crushed ice to keep the drinks cold and refreshing, in keeping with the “Ice Cold” label that appeared on every machine.

In 1937, two companies – the Vendo company and Vendorlator Manufacturing Company – merged to form a single soda machine manufacturing firm. The resulting company produced over 5,000 coolers, which were installed at military bases and factories in keeping with Coca-Cola’s pledge to provide free soft drinks to all of the nation’s servicemen during wartime.

The post-WWII Coke machines, in particular, are considered to be works of art and are highly prized by collectors. The first coin-operated machines featured white-over red units; thirsty customers would insert their nickel, then open the door and retrieve their bottled Coke.

With the American Retro Coke Machine, you can bring a little piece of vintage Americana into your own home. These exquisitely designed models are authentic down to the last detail and create the perfect conversation piece for your family room, bar area, or outdoor patio. You can find these vintage-style Coke machines, along with other great products from American Retro, at A Kid Place.