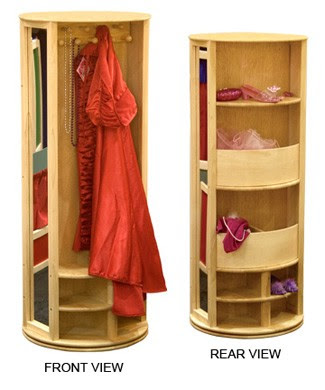 When my daughter was three, she "inherited" a fleecy, hooded dragon costume from a cousin. For weeks, she was obsessed with it - she insisted on wearing it wherever she went and even slept in the thing (I gave up trying to get her out of it except at bath time, when I put my foot down). While the costume was on, she was not only dressed as a dragon - she was the dragon; she would stomp around the house, claws bared and growling, until the cat would run away at the sound of her footsteps. Fortunately, the obsession faded, but was quickly replaced with an equally fierce devotion to a princess costume.

As adults, a child's need to play dress-up can be as puzzling as it is amusing - what is your little one really thinking about when he or she spends days at a time dressed in a ballerina costume or police uniform? In fact, this type of dramatic play helps young children to learn some important life skills.

What kids get out of dramatic play and dress-up

When kids engage in imaginative play, they aren't just having fun - they are developing some vital social, intellectual, and manipulative skills. Dressing up in costumes, or in their parents' clothing, teaches them not only to zip, button, snap and tie, but to empathize with others; dressing up as a fireman, for example, helps a child to put himself in the fireman's shoes - so to speak. Research has shown that kids who engage in dress-up games tend to have a better understanding of other people's feelings and points of view later on.

Role play helps kids to create imaginary scenarios that put their problem-solving skills to the test (how does the fireman rescue the kitten?); kids who play dress-up together also learn to cooperate as they work out their imaginary scenario.

Another important aspect of dramatic play is learning to think symbolically; a child who pretends that her chair is a throne is actually developing the intellectual areas of the brain that will allow her to comprehend writing, reading, and mathematics.

How to encourage your child's creative side

If your child loves dressing up and pretending, you can encourage him by providing old clothes, costumes, plastic "jewelry," hats, last year's Halloween costumes, and anything else you can think of. Create a dress-up space in your child's bedroom or playroom; the Guidecraft Dress-Up Carousel - available at A Kid Place - is the perfect way to store all of your child's dress-up items for easy access and quick clean-up when it is time to move on to a new activity. The Guidecraft Dress-Up Carousel comes in Natural and Pastel.